There are good reasons why it takes on average 10 years for a drug/vaccine to go through Phase 1, 2 & 3 trials and get FDA approval. It takes time to analyze long term effects. The fact these vaccines have been rushed by gov’t & big pharma is an insanely dangerous mass experiment on the public. This is gross negligence and malfeasance on the part of the medical establishment. 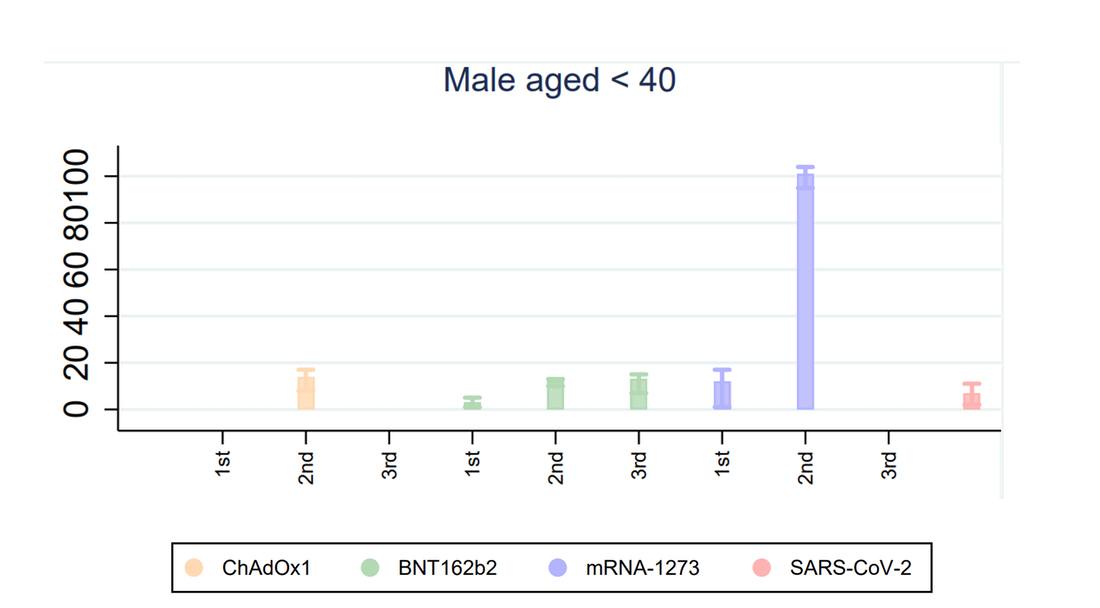 Vaccines are more dangerous than infection for Males under age 40

1. It is now clear for men <40, dose 2 and dose 3 of Pfizer have more myocarditis than sars-cov-2 infection, and this is true for dose 1 and dose 2 of Moderna.

2. Pfizer boosters (Dose 3) have more myocarditis for men <40 than infection.

And here is why it matters:

There is marked uncertainty as to whether dose 3’s actually lowers severe outcomes & hospitalizations in young men. The FDA is making a huge regulatory gamble with boosters, and they are cheered on by many who are not adept at data analysis.

Boosting 16-40 yo men might not be in their best interest (it might be net detrimental). We simply do not know with confidence. If it is revealed that it is not in their best interest, this administration will have dropped a nuclear bomb on vaccine confidence for 20 years. God help us all.
Source: https://vinayprasadmdmph.substack.com/p/uk-now-reports-myocarditis-stratified?s=09

Study based on data from emergency services. COVID infection itself not linked to significant increase in cardiovascular complications. 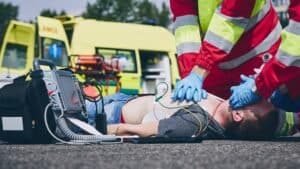 A new study by Israeli researchers and published in Nature has revealed an increase of over 25 percent in cardiovascular-related emergency calls in the young-adult population, following the rollout of COVID vaccines, among both males and females. No similar increase was found due to COVID infection alone.

Twitter initially censored and deleted this announcement by a state official and after much public outcry reinstated it…. 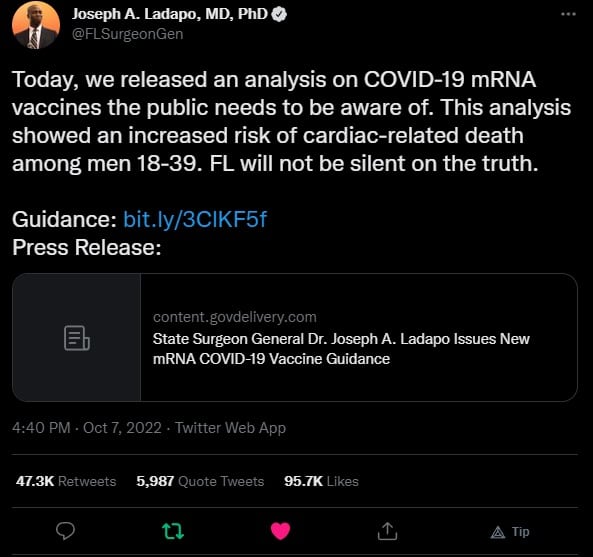 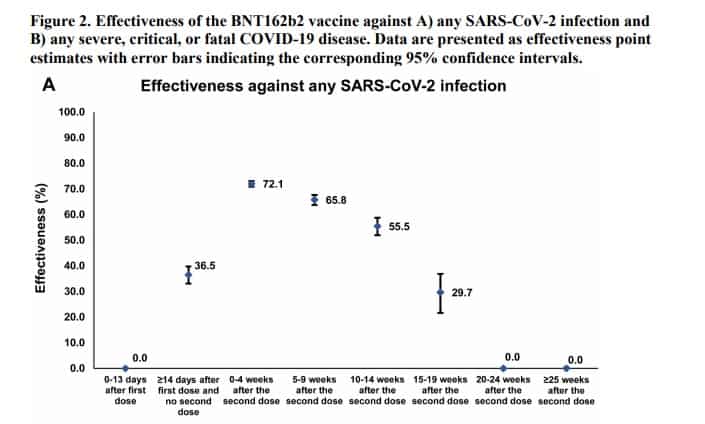 Why is the vaccine so dangerous?

Back in September when Alberta was going through the peak of it’s Delta wave, and after a summer of successfully vaccinating about 80% of the population our Premier said the pandemic is now “A Crises of the Unvaccinated.” (Joe Biden said the same thing around that time.)

The reason for this as our Chief Medical Officer shortly explained is that the majority of people in hospitals and especially ICU’s (close to 80%) were the unvaccinated. Clearly the vaccines appeared to be working at preventing severe symptoms and death.

However, I suspected this might not be the case remembering a critical point from stats 101: Correlation does NOT mean Causation!

My suspicion was seemingly confirmed a few minutes later when the Chief Medical Officer announced most new cases were from rural communities. Why is this little piece of information important!? I knew that people from rural communities are more unhealthy by a significant margin than city people. Across the board in Canada rural rates of obesity and overweight are much higher, which as we know leads to pre-conditions which lead to severe outcomes of covid.

Dr. McCullough on the Joe Rogan interview made the point that this error in reasoning is called SELECTION BIAS. And it seems to have tainted nearly every vaccine efficacy study put out there. If in your study it is primarily healthy people that get the vaccines, and unhealthy people that don’t as your controls, then vaccine efficacy in outcomes becomes artificially inflated in a dramatic way.

And so those who are fat have a much greater depot and an ability to produce the site of kind storm. That’s the reason why obesity is an exquisite risk factor for mortality is because of the unique side of kind signature of SARS-CoV2.”

Looking at the death from covid data for the last 2 years in Alberta it is abundantly clear the overwhelming majority of severe outcomes are caused by ill health and preconditions NOT lack of vaccination. This is and always has been primarily “A Crises of the Unhealthy”. The fact that people thought vaccines could somehow get around this was highly suspicious!

In the fall almost every 2 days our Chief Medical Officer posted a pretty infographic on twitter showing 80%+ ICU’s were the unvaccinated with the message “Get vaccinated.” This drove political policy around covid passports and the medical segregation of society. Once Delta finished spreading through rural communities and Omicron took over the posts mysteriously stopped appearing. The numbers don’t support the ill-conceived narrative anymore.

I wonder how long it will take the medical establishment to realize their mistake…..maybe they should have paid more attention back in school in their stats 101 class.

If vaccines actually protected people, then why is the vast majority of vaxxed people are the ones getting infected?
(screenshot from Alberta gov website Jan 10, 2022. Conveniently the gov’t stopped reporting this data sometime after.)

If vaccines actually protected people from SEVERE symptoms, then why is that the majority of people hospitalized from covid are vaxxed? Source: https://www.alberta.ca/stats/covid-19-alberta-statistics.htm#vaccine-outcomes (screenshot from April 13, 2022

It should be OBVIOUS  that Pre-condtions are a far greater predictor of death than vaxx status, wow being healthy means something.

"Get vaccinated for others" was always a lie.

The only purpose of the #COVID passport: forcing people to get vaccinated.

The world needs to know. Share this video! ⤵️ pic.twitter.com/su1WqgB4dO

Sweden a case study in non-lockdowns 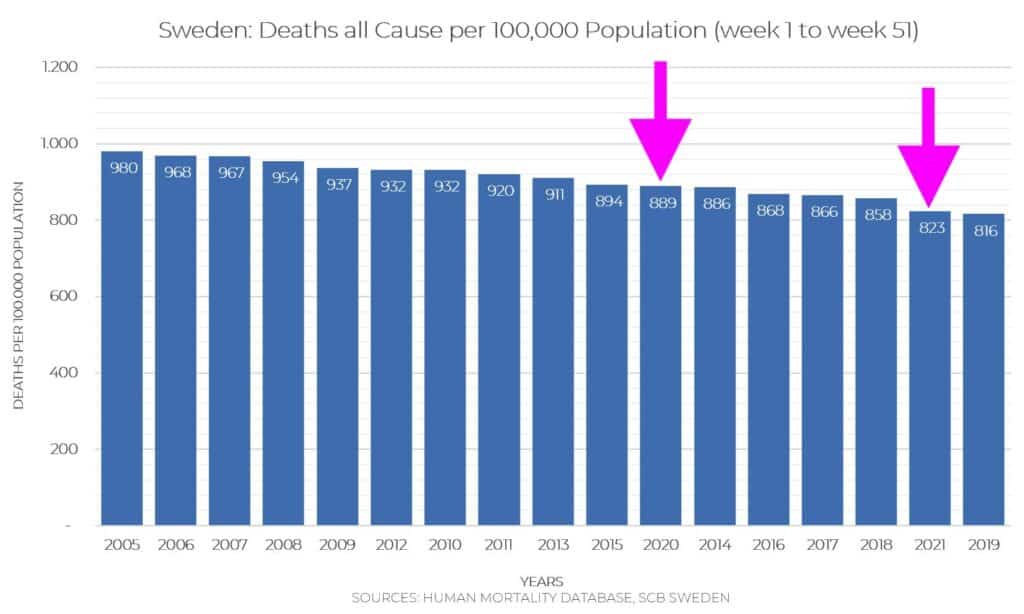 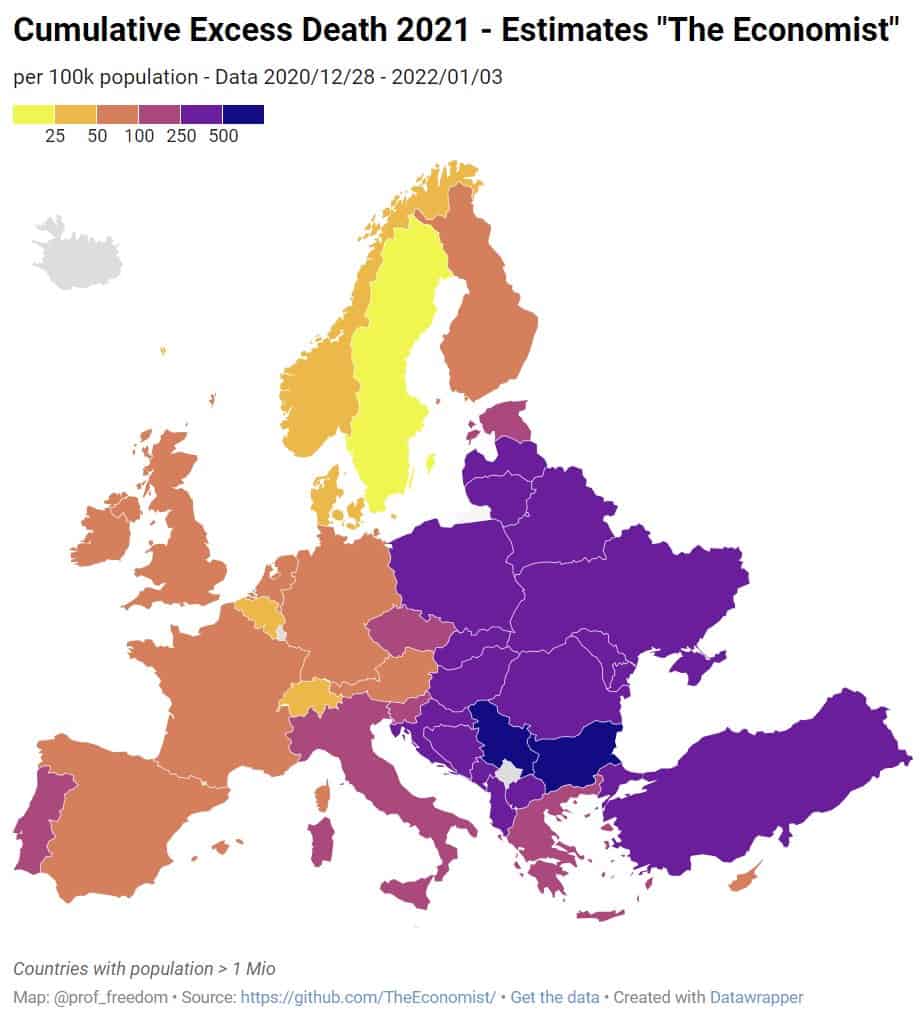 The commission did, however, state that the no-lockdown strategy was fundamentally reasonable, and that the state should never interfere with the rights and freedoms of its citizens more than absolutely necessary. The commission also supported the decision to keep primary schools open. 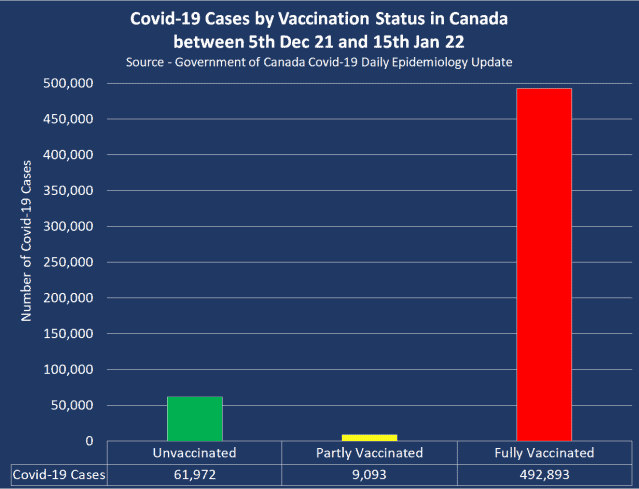 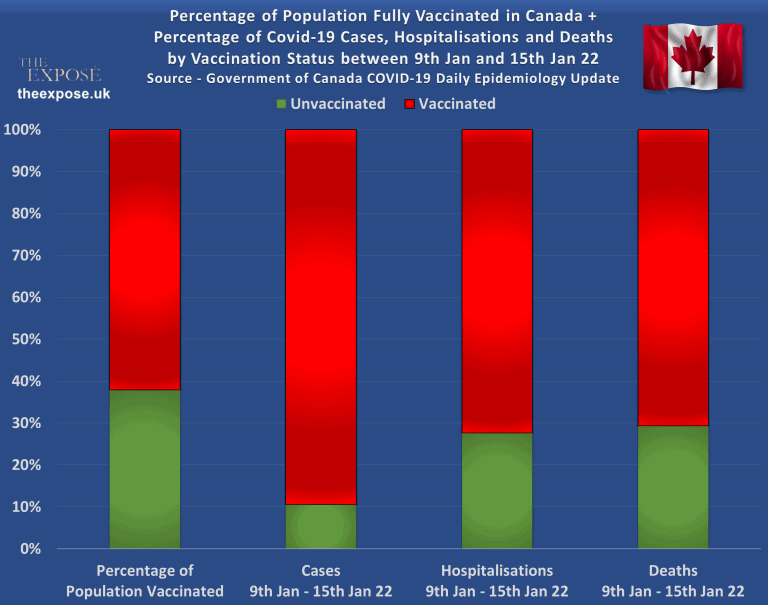 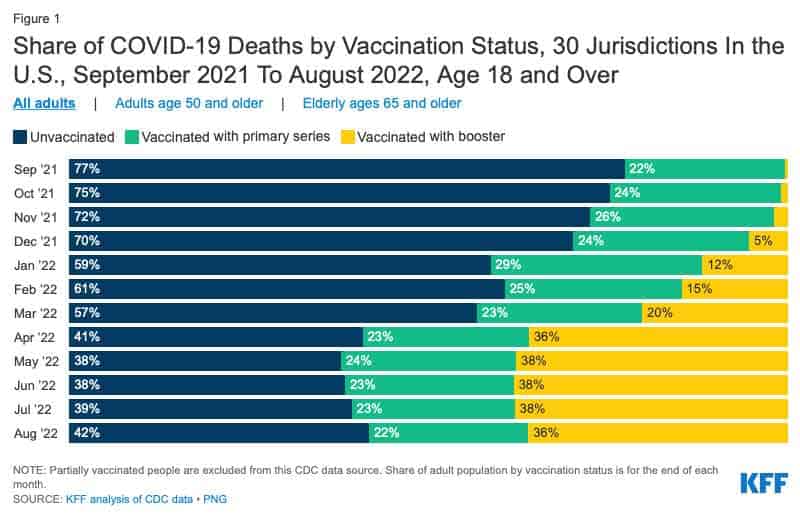 If you are interested in potential life saving covid treatment protocols I highly recommend watching the most recent interview by Joe Rogan of Dr. Peter A. McCullough. Many hospitals and doctors remain ignorant of these options and some are quite simple.

The efficacy of the vaccine is also discussed, and recent research shows that for majority of people it offers negligible protection even against severe outcomes. This I found shocking, and Dr. McCullough goes on to show how there was and continues to be significant selection bias at work when determining vaccine efficacy. Adverse effects such as the dramatic rise in Myocarditis are also discussed.

This holds true especially for males up to age 50. In football players in Europe incidents of cardiac deaths are up 5-fold. The unscientific narrative that is being pushed and the level of coercion being used is a blatant violation of the Nuremberg Code. The level of group think operating in society around this subject is highly disconcerting.

Watch directly on Spotify or here with transcript

How bad is my batch?

Some batches/lots are associated with excessive deaths, disabilities and adverse reactions. This variation could be due to –

Both factors may play a part. Until we know for certain, it is best to be cautious. 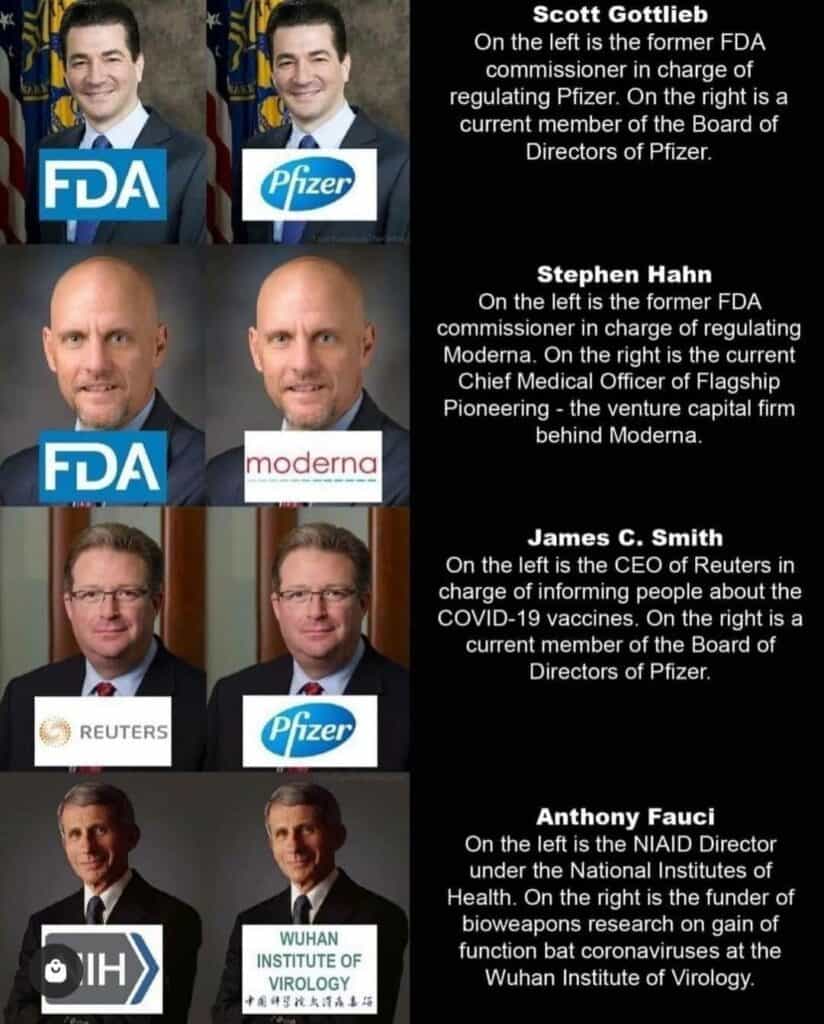 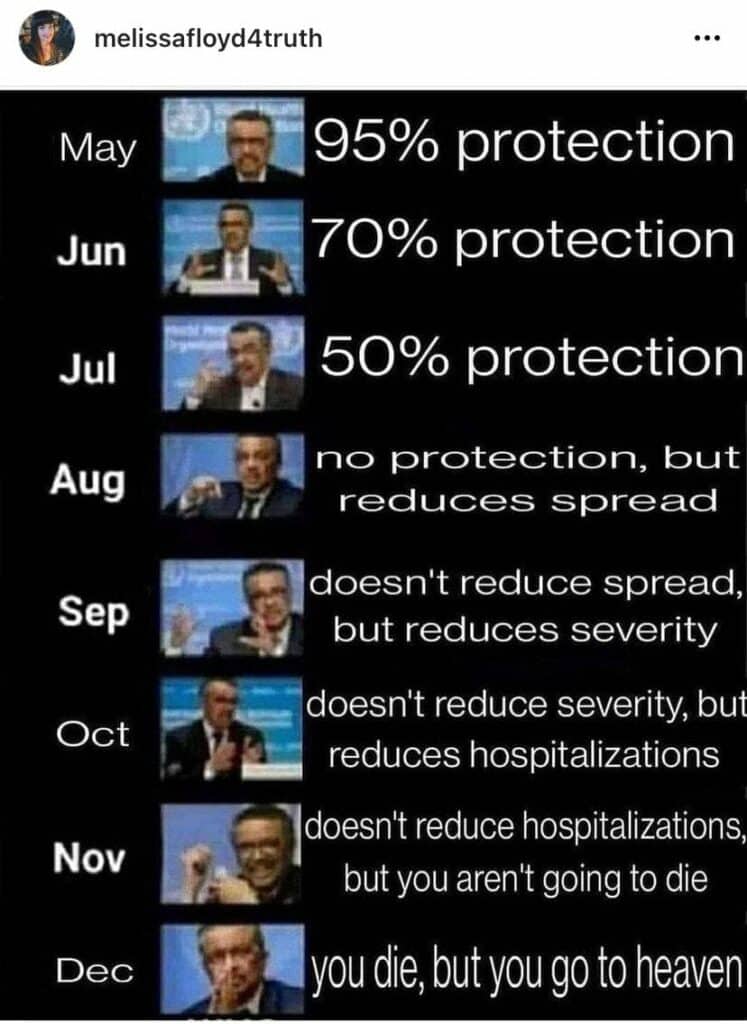 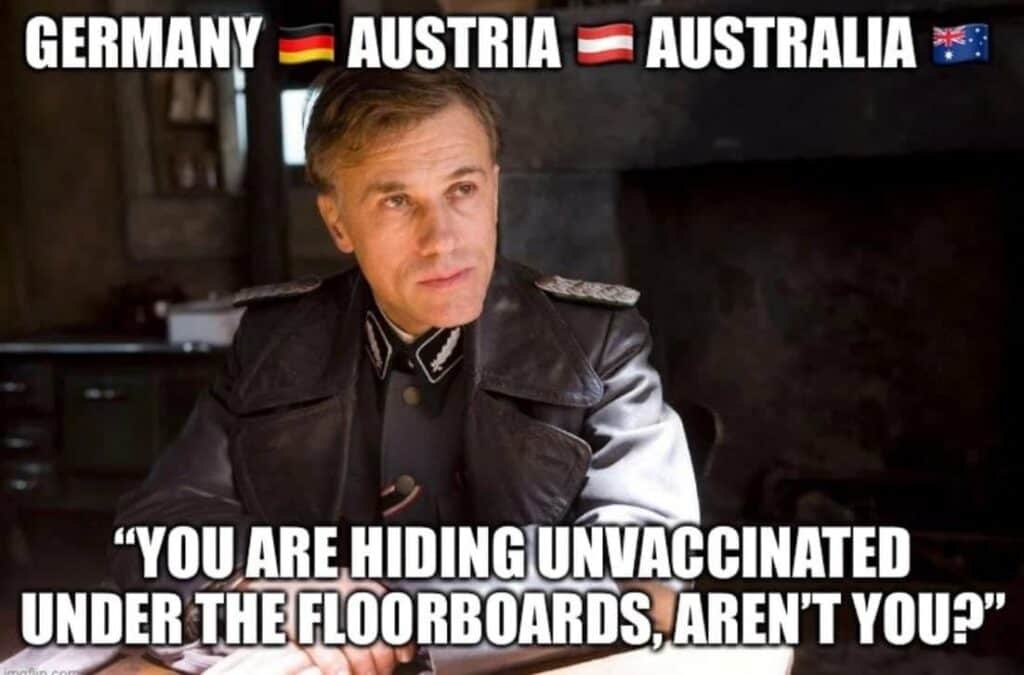